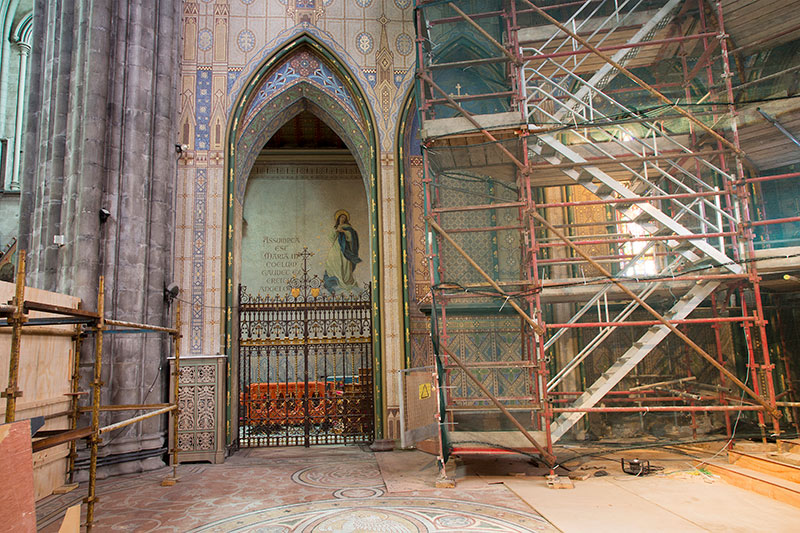 Working NOW to restore the PAST for the FUTURE

Each generation has contributed to the story of St Mary’s Cathedral. Consecrated by Bishop Walsh in 1857 each decade has seen work in the Cathedral. The addition of stained-glass windows in the 1870s, the mosaics, statues and altars of the 1890s, the decoration of the apse in the 1930s all contributed to the beauty of our cathedral.

In the 1970s Bishop Birch oversaw the alterations to the sanctuary in line with the liturgical reforms of the Second Vatican Council. An altar hewn from Kilkenny Black Marble and corresponding ambo and the Bishop’s Cathedra were installed and made a significant difference to the Cathedral. A series of relief panels were designed by Edward Delaney for the new altar and ambo.

In 2010 Bishop Freeman began a programme of work in the Chapter House and the Cathedral.

Initially the main sacristy in the Chapter House was refurbished and a café, a gift shop and a conference room – formerly the Chapter Room for the Canons of the Diocese – were restored and redecorated. Beneath the sanctuary floor the former coal store and one time sacristy has been transformed into a Blessed Sacrament Chapel. This phase was completed in September 2012.

In the cathedral itself Bishop Freeman oversaw the restoration work in the apse. A specialist team of restoration painters carried out the work over a period of many months. Painted features adorning the window surrounds and supporting columns were also revealed and reinstated with particular attention paid to investigating and recording the underlying history as evidenced throughout the works. Beneath the ceiling the hand-cut mosaics which decorate all the sanctuary walls were repaired and cleaned. This was undertaken through the application of non-abrasive pumice to the entire area and removal after drying which lifted the build-up of carbonation, dirt and smoke that had gathered over the decades without damaging the mosaics themselves. At this time also a local stained-glass expert repaired and re-leaded the magnificent and original stained-glass windows thus securing their integrity for future generations.

At floor level a number of statues were cleaned and reinstated to their positions, bespoke furniture was designed and installed within the alcoves, the altar was repaired, and the floor mosaics cleaned. Discreet lighting was added in concealed locations to highlight the complete works. This work was completed in June 2015.

Our attention has turned now to the furnishings required for the celebration of Mass. An altar, ambo and baptismal font is in the process of design and will be installed in the Cathedral over the next 12 months. The chapels of Our Lady and St Joseph are also under repair at this time and the wall mosaics will be cleaned – the reredos of both altars will be restored. A new lighting design will also enhance these chapels.